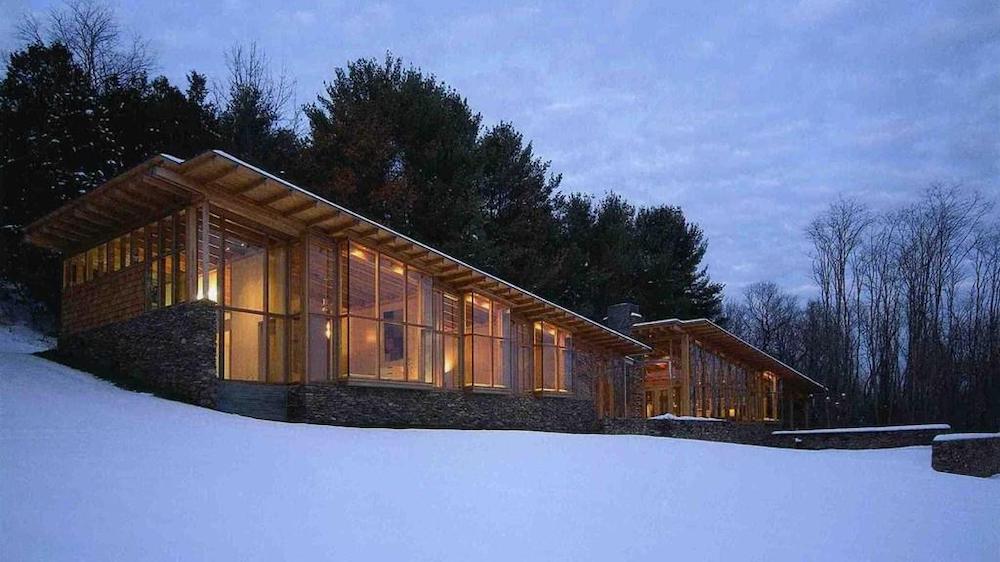 An authorâs modern retreat in the woods received offers within a matter of days.

Built with flair and inspired by the legendary architect Frank Lloyd Wright, the home on McNeil Road in Pine Plains, NY, landed on the market a couple of weeks ago for $3.5 million.

“People appreciate the style, the quality, the land,” says the listing agent, Ira Goldspiel. âBuyers are looking for something like this, and sadly, we donât have much like this. Itâs a very unique property.”

John Gillespie, Jr., a business executive, and the writer Susan Orlean, author of “The Orchid Thief” and “The Library Book,” built the 3,029-square-foot house in 2005.

The result was a labor of love that the couple simply hasnât used much recently. As a result, they have decided to sell.

The home was designed by Cutler Anderson Architects, the firm that designed Bill Gatesâ house. Goldspiel describes its style as natural modern, echoing many of the tenets of Wright’s organic design.

âIf you look at this property, it is sited and built so that it feels like it’s part of the nature around it,” he says. “To me, that is impressive. I’ve seen people build homes that don’t do that, and that is sort of depressing. It’s got this wonderful wall of glass.”

He stresses that the home is filled with light, and that the natural stone blends in harmoniously with the landscape.

The home sits on 56 acres, with views of the Stissing Mountain and the Taconic Range in upstate New York. Huge floor-to-ceiling windows frame the views.

âYou come in, and you’re in a hallway, and then you open up and you get into this common roomâand you just see windows, windows, windows, and light,â Goldspeil explains. âYou have these dramatic views just being in nature, and surrounded by it and light.â

The house has three bedrooms, 2.5 bathrooms, and lots of open living space, with post-and beam construction, natural stone, and plenty of wood.

âItâs strikingly clean and modern. It is very efficient in terms of space,â Goldspiel says.

He adds that the kitchen should be considered part of the living space.

âIt’s a great cookâs kitchen, and you have to think about how people live today. We’re not separating ourselves from each other, so when you’re cooking or you’re hanging out, whether it be with family or friends, you want to interact,â he says.

The potential for gathering is limitless, with room for people to group around the island, at the dining table, in the living room, or on a window seat.

“This house is all about communication and communicating with people,â he adds.

Those not in the mood to connect can seek out the treehouse, as well as a climate-controlled writing studio for total solitude.

Thereâs also plenty of outdoor space, including a swimming pond with a pergola and a barn to store everything.

Goldspiel notes the open courtyard outside, with a fireplace that matches the interior.

âAn outdoor fire in the country, there’s nothing better,â he says.

The post An Author’s Modern Retreat in New York Is Impossible To Put Down appeared first on Real Estate News & Insights | realtor.comÂ®.